Aliona Kuznetsova came to the attention of Lucire as a fashion photographer in the 2010s, but her history is even more interesting. Hailing from Ukraine, and now resident in the US by way of Switzerland, Kuznetsova had an upbringing within the Soviet Union and trained as an engineer before embarking on photography. Since moving Stateside, her career has really taken off, building up a fan base of 100,000 people on Facebook, and presently Kuznetsova is about to publish a beautiful photographic art book, Vague Sensations, comprising 53 of her best works, complemented by essays. Hers is an inspirational journey from the days of the USSR to finding success in her chosen profession, and it’s an positive story about someone who has bipolar disorder and has successfully overcome the stigma and prejudice that those with the condition face.

She was in preschool when the Soviet Union still existed. She notes, ‘I never was exposed to Soviet propaganda. In our family we read Hans Christian Andersen, Mark Twain, and Alexandre Dumas. My early childhood was very sweet, very sheltered—I grew up without gender roles’ expectations, or monetary concerns or racial issues. I was the first child of two young professionals and I have a lot of happy memories.’ However, she says than when the USSR collapsed, it took a big toll on her parents: ‘Their profession [was] rendered obsolete and, like many, they had grave financial problems as well as identity issues. It affected me and my little brother, too, but still, they tried to shelter us as much as they could.’

While in middle school, Kuznetsova had a physics teacher who she recalls as ‘wise and empathic’, directing her toward physics competitions. ‘We called the Olympiads. One year, I even held first place nationwide among my year. This experience taught me two things: I can do whatever I want if I work hard and work doesn’t feel like work if you do what you love.’

From there, she applied to the Moscow Institute of Physics and Technology, and was accepted into its most prestigious department, and it was there that photography began emerging. ‘The studies themselves were not what I expected and I grew cold to the whole idea of engineering as my career. Photography, on the other hand, started as a hobby but turned into so much more. It represented self-expression and freedom from imposed boundaries and to this day, I make sure I still feel most free when I create.’

Kuznetsova married young, and knew she could count on her husband’s support when she needed it. ‘It was a privilege and inspiration to see my husband excelling in his own great career, but the best thing is to have the person I admire the most always in my corner, no matter what happens.

‘As for individuality and creativity, we both are extremely growth-oriented people and intellectual freedom is a priority for both of us, so in our marriage, we don’t try to trap each other into certain roles; we are just doing what works for the two of us.’

After her studies, both she and her husband were keen to work at an international level: ‘We wanted a chance to work with the best to eventually become one of the best! In Russia and Ukraine there weren’t a lot of opportunities to do so, hence we decided to look west.’ The opportunity to head to Switzerland came up, which the couple seized.

‘For me, moving to Switzerland was challenging because of the language and cultural differences, but at the same time, it opened my eyes to a much broader spectrum of photography and allowed me to find my own style and my place in the industry.’

Five years in to their lives in Switzerland, Kuznetsova got a position at the EPFL+ECAL Lab, a design research and innovation centre at the École Cantonale d’Art de Lausanne. She talks openly about having bipolar disorder, and her condition took a ‘turn for the worse’ while there.

The EPFL+ECAL Lab position had been her dream job, giving her resources she could not have conceived of as an immigrant, but sadly her boss was less understanding of her disorder. ‘I don’t want to describe here the amount of stigma, misrepresentation, and suffering my boss put me through before firing me from that position, but it taught me an important lesson: people with bipolar disorder will suffer from stigma until we will have enough examples of people who live a fulfilled life while being openly bipolar with adequate treatment. So I am just trying to do my little part here.’

Examining Kuznetsova’s work, she consistently conveys emotion and depth in her photography, something that this magazine spotted when it first published her work. ‘I love to tell stories—light or deep, happy or sad—I would say my moods change as fast as fashion seasons. And working with my favourite designers and hmuas [hair and make-up artists], I can bring any colour or shape into my work. In verbal stories, we can leave out any detail, but visually we have to express models’ inner state through their appearance. Is she happy or sad? Put together or chaotic? Powerful or lost? We don’t have words to describe that—only body language and looks.’

She continues, ‘Also, of course, fashion helps me to find my freelance jobs. Brands that pick me, normally work with me long term. I help them to elevate their visual identity, and they allow me to do what I couldn’t achieve alone, like my Mongolian journey for example.’

Kuznetsova’s earlier shoots in Mongolia rank among her favourites, so much so that she planned a follow-up, though COVID-19 put paid to that for now. ‘I have a client in Geneva who is an immigrant from Mongolia. She started from nothing, and now she has her own boutique downtown Geneva called Sodgerel Cachemire [sodgerel.com]. We did a few campaigns together before she offered to do a series in her home country.

‘The whole process was awesome! We got to shoot in a Buddhist monastery and in the countryside with a yurt as well as some very glamorous hotels. Because Sodoo is local, she knew how to ask for things and get the unique opportunities we had. She was also such an elegant host!’

More challenging was a shoot she did after she left EPFL+ECAL Lab. ‘When I learned I would be leaving … I was still very weak after my illness. It was a hard time to get through, so sometimes I would just sit and breathe to get back in touch with the surrounding world. Around that time I made this work, it’s called Breath in—Breath out. I will be forever grateful to my model Leila who helped me to release this feeling into the picture.’

Above: Breath in—Breath out, which Kuznetsova made after departing EPFL+ECAL Lab in Switzerland.

Kuznetsova has a skill in having her models bring out the emotions in her shoot. She describes the process: ‘The first step to our connection is trust. I would never offer to do something heavy on the first project. We normally start with fashion editorial or some visual exploration and 80 per cent of [the time] it ends there. The other 20 per cent are people I really become friends with. Normally those are people who love art and who are in it for self-expression the same way I am.

‘The next step is co-creation. It takes two to three sessions to get to know a person’s style and build rapport. Within these sessions, I share the mood board with a model, talk about the concept and æsthetics and we decide who else we would like to involve, collect props together, she shows me some inspiration she found—we have a dialogue going.

‘But the final step that creates my best pictures is having shared emotional experience. It doesn’t mean we had the same story, but if we both went through, let’s say, loss, we can shoot about loss together. It’s not a concrete story that matters but a shared feeling—real and raw emotion.

‘So you can see these pictures are quite rare—I only have 53 in my book for 13 years of photographic practice!’

Kuznetsova next moved to the US, finding that the country was one where good work was rewarded over personal connections, and where her creativity could flourish. ‘It’s normal to reach out to people, show your portfolio. If it’s good, you’ll be recognized,’ she explains.

‘When I just came to the US, I got picked up by Raw Artists, they gave me a showcase, so I got to meet other artists and received a lot of compliments from the public. That gave me the confidence to contact venues for exhibitions, including a big showcase I got in New York. And recently I got accepted to my first gallery—Gallery House in Palo Alto, so now my art has its first permanent home!’

That success led to her large following, and soon Kuznetsova was receiving regular correspondence, asking her the stories behind some of her work. ‘I figured I needed to create a narrative, to take people from seeing my pictures one by one every few days, to seeing the best of them in perspective.’ The book began taking shape.

‘I started with a collection of visuals first and I kept asking myself what the book was about (I really resented the idea of it being all about me). I put all the work on the wall and I was looking at it for days. I removed many of the images—from the initial 350 only 53 made it to the final version.

‘Then I kept trying to put into words what are they about—I mean strong emotions, yes. But also an emotional mix-up of two, three, four things you feel simultaneously. Some emotions are strong and readily apparent, but some are so vague, like an aftertaste, and yet they give the image its complexity. From there I arrived on my title: Vague Sensations.’

From there, she showed the prototype to some friends and strangers from her Facebook page. ‘All of them gave me the same feedback: we need a narrative put in words, we want you to explain a bit, reassure us that we “read” it right. So I added some words about my story—it was surprisingly difficult, I felt very vulnerable doing that.’

No particular work ranks above another in Vague Sensations. ‘They are all important to me. Each and every one of the 53 represents something significant. But I will tell you this one story that’s not in the book.

‘My bipolar started from a huge crisis, followed by several months of clinical depression. And in a short time after I got better, I created this shot [below]. I was so proud of it, that I showed it to my doctor. He looked at me and asked if I thought I could create something like this before my illness. I had to say, no, I couldn’t have.’ That image, which has made it into her book, is another testament to Kuznetsova’s real, emotional, and deservingly acclaimed work. •

You can back Aliona Kuznetsova’s Vague Sensations book on Kickstarter by clicking here. Pledges are open till October 1. 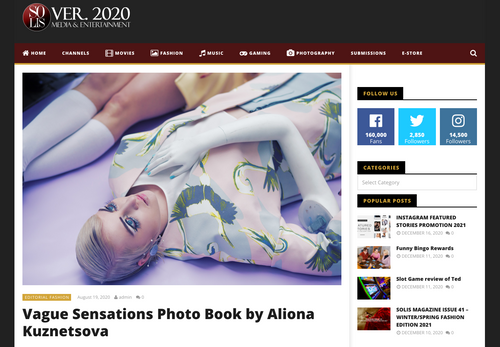 http://solismagazine.com/vague-sensations-photo-book-aliona-kuznetsova/ This September San Francisco photographer Aliona Kuznetsova is releasing a new photo book called Vague Sensations. The photo book will be a result of 12 years of visual research 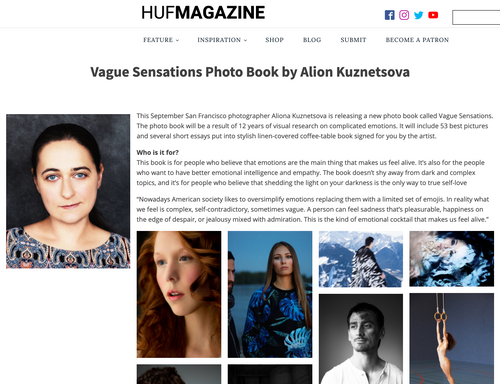