“Look, miss, just start boiling a little grass and bring that to me as if it were soup.” “What kind of grass, doctor?” the servant asks. “Ordinary grass, ma’am,” the doctor says. “The kind that donkeys eat.”

My first memories of Gabriel Garcia Marquez’s creation is from middle school. We read “One Hundred Years of Solitude” and discussed it in class, but all I could remember months later is that it was about traveling in a very bizarre circumstances and characters had this constant longing for something or discomfort of some kind. For whatever reason I remembered most the very first part of the book.

During college I rediscovered GGM, this time starting from short stories. This time I was older and ready to understand the book on more abstract and symbolic level. I read it during hiking trip in hot season so my surroundings were fitting to the context. I remember the stories had almost hypnotic effect for me — if I started one I wouldn’t stop before I finish.

Latest rediscovery happened a few years ago when I was recovering from a long illness and was going through darker chapter of my own life. GGM provided a perfect escape, but this time I was more ambitious than that — I decided to create my own photo-tribute for some of his work. First I reread One Hundred Years of Solitude. Once again it spoke to me on a different level. Chapters about insomnia, labeling objects, memory dysfunction, and also part about José Arcadio casually conversing with a ghost — those aspects started to shine at that time.

I knew that I won’t be able to shoot about One Hundred Years Of Solitude though, it was just too big of a production. So I picked Eyes Of A Blue Dog— sophisticated and deep love story that created a world of dreams and one of reality and reality was half mad for one character and perfectly normal for another. I tried to visually play on this notion on day and night worlds and how they interact. GGM is elegant and smart enough to not divide them completely. For example an accidentally dropped spoon in reality would ruin the whole romantic encounter of characters in the dream.

You could read more about that given photoshoot here. In general, GGM made me think that all elements in the frame don’t have to be logically explained — as long as I show it right people will start to derive meaning from them on another, associations-based and symbolic level. 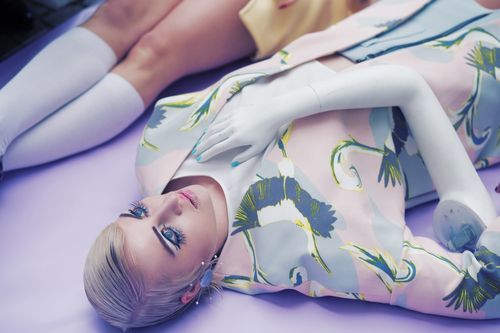 One of my biggest inspirations because I got to live through it. I can talk about my story privately, and in some of my interview, but…

So, I have a feeling that we should maybe take a small break from technical stuff and look at something more creatively stimulating. I…