I had a bad dream tonight. I dreamt I had a photoshoot and we needed to gather some props, and we could not find them, and it was more and more late and I kept changing the plan of the shoot to squeeze it in the time left. But with growing anxiety and then desperation I could see the sun going lower and lower until it was gone, and I was forced to admit the shoot was off (that's when I woke up). I see this dream or one of it's variations at least couple times a week for as long as I do my photography.

When I just moved to Switzerland I had a very particular opinion about local landscapes. I thought they are beautiful to watch, but they are way too much for fashion photoset - mountains, lakes, forests meadows are just so strong that the model would be overpowered by the surrounding. Yet with time I learned now to use the surrounding wisely to let it start the story and build it up in tension before the model can be introduced. And then the model becames a final strong accord, the channel for empathy through which the viewer starts to feel as if he/she was there.

It was as if the curtain felt down before my eyes and I saw the whole fairy tale land of Switzerland. Green hills, strong mountains and serene blue lake coast became inhibited. Naturally not by casual people, but sublime, out of this world creatures, characters of the fairy tales we know from childhood.

The "what" was solved and the "how" began. First I felt like the big shoot needed a big plan. The 14 hours shooting day used to be planned by minutes and supposed to work as Swiss watches. But with time I understood that the closer analogy would be not the watch, but the house of cards - take one out and the whole construction falls apart. Most times something ruined the plan - there was a traffic jam, of sudden rain or hair kept fall apart because of the wind.

The apogee of all of this was "Winter vs Spring" shoot. We had a great plan to go up to the mountains and 5 amazing look to shoot on the snowy slope. When I opened my eyes at the shooting day it was very rainy. But I wanted to do this shoot, so I just thought that in the mountains the weather will be totally different. And it was - as we went up the rain was transformed in the wet snow and later in huge soft snowflakes. Our car started to get out of control. In some point Diane said we can not go further. As we did not know if/when the road will be cleaned and it was still snowing heavily we had to turn back asap.

At this moment the reality started to look very much like a bad dream I described at the beginning. But I convinced my team to make a shoot happen. We  drove down the mountain road and I was looking very carefully for good location with the pocked in the side of the road - small barn, good view on a snow slope, mysterious wet trees and view on the forest across the valley. It was no schedule anymore, but a pure adventure. The mountain landscape was leading me and I was just reacting: yes, no, this works, this should be left out.

I could go on and on describing our adventures - once we went to the small lake to shoot with an April forest just to discover it was all covered by snow. Another time we shoot in the lake during the summer rain when the sudden thunderstorms freaked us out. Once in the mountain we were chased by cows. With time we put the name on such events - weather with an attitude. If you go against this weather your shoot will be ruined, but if you find a flexibility to follow where the weather leads you, you can capture something truly unique. Marion, one of my favourite girls, shared with us the model's point of view: "It is difficult to pose in a dramatic way when you are comfortable and the surrounding is perfect. But when you have to struggle against wind, cold or heat you can use this struggle to wake strong emotions inside you"

Now it would be difficult to me to describe how I feel during my best location shots. Often I loose the track of myself and dissolve in the narrative. I feel the light, the wind, I am aware of any change on the background. But main resources are of course devoted to the model - and trough her to the story. How does the model feel now? How does she show it with her body and face? What happens next? Together we discover correct poses, moves and attitude which help us to give in the flow of the surrounding world and eventually master it. 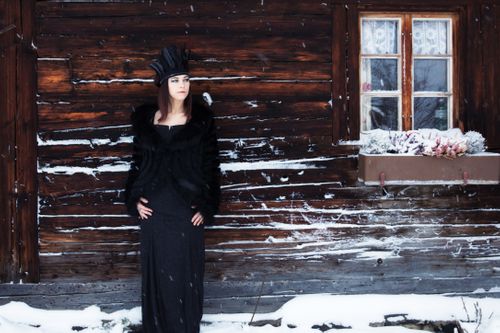