In this part I compare the culture of doing both business and collabs in Ukraine, Europe and the US. I translated the table to English just once, first 3 untranslated tables are just sunsets of summary one

(Recording) Next thing I wanted to talk about is this table where I compare approach to photography in Ukraine, Europe and the US. It's more funny subject, you will help me with it.

Ok. So when you start to talk to people in Europe all of them know a lot about art. For example you can use with the model references to Remark or to Klimt, they will know all that and start to add some references from themselves.

In the States models are all about pop-culture. You are sitting there and they are talking about Lady Gaga and how she is just 5'2" and that seems really important for them. So when you try to tell something to them, you need to tell it from the start which you can also use. For example at this photo our inspiration was a story or Persephone. I started to tell this myth to the girl, she didn't know it, and then I started to ask her questions like "what would you feel in this situation?", "what do you think about the contrast between young Cora and Persephone the queen of underworld?" Do you know that story? (Both "yes" and "no" is heard from the audience). Ok, that's going to be your homework. So, different base - reference base as well as cultural base.

As a consequence from this we also have different standards. In America every idea you bring to the team will be met with a lot of enthusiasm.  They never heard those stories and it's interesting because it's something new, something fresh, they like it a lot. In Europe people look at you and think, well, don't you understand that everything has been already done? Don't you understand you are not Van Gogh? Well it's hard to believe there's something less left to do in arts.

Ok, temp of work. There is also a difference. In Europe the length of a meeting is normally 1 hour. Well one hour means you you didn't like each other so much, if you hit it off, you will be spending all afternoon together. In the US it's different - the length of the meeting in exactly 30 min. If you come in and at min #27th they tell you "so what are your plans for the rest of the day" it doesn't mean they didn't like you, it just means they have the next thing scheduled right after you.

Feedback. From what I can tell here in Ukraine you will for sure be told if you did something wrong, and everything you did right with the picture won't be mentioned. But it's only here. In Europe the worst think you can get is silence. They treat it as if you are walking along waterfront and see a painter. If he is good you will give him a compliment, if not, you will just pass by. So, if no-one told anything, chances are the work isn't that good. If they say something, they'll say something positive. In the US it's even more different - you will ear only positive things, and what you hear you should divide by 1.5 if not by 2. If you are saying "Thank you so much" in means "Thanks"; if you say "Thanks" it doesn't mean anything. The culture is build in the way to minimize social tension. It has also certain plusses. There are minuses of course - it's very hard to learn something if you never get to know about your mistakes. But the plusses are you have support all the time and at the end you start to believe in yourself and do much more and better.

Failure. In Europe if you had any failure or something bad happened to you you shouldn't talk about that, hope no-one will know. In the US when you come to an interview and you say I tried to do this and that, but I failed, they will read it as the fact that you have some experience, you learned something. So it's a plus for you.

As a consequence in Europe people try to avoid risk, whereas in the US people are more open to it. I have this example on the next slide. On the right is European brand, cachemire, the client is a wealthy woman in the 40th or 50th, she wants to look elegant and chic, the model should look elegant like that. In the US everyone wants to differentiate, be something special, so as a result you get to play and explore, because the goal is to be different.

The last one is interaction or collaboration. I wanted to stress this, I think it's important. We see any interaction as a win/lose situation. I will eat bigger slice of pie and my opponent will get smaller. In the US you try to make the whole pie bigger. You try to find a team who will elevate you (and you will elevate them) above the competitions. Here it's more like jungles. Well, maybe not anymore, I don't know (Voice from the audience "No, still the same"). 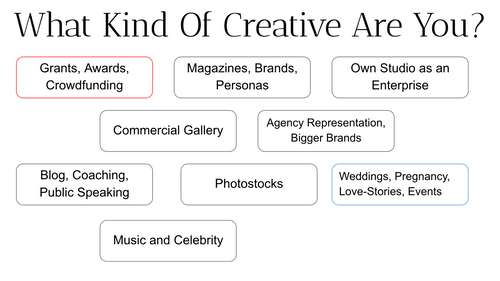 Ok, let's do this now. Again don't take it too seriously, more like a fun experiment. We will try to determine your best fit in photo-industry based on the characteristics of your creative process. 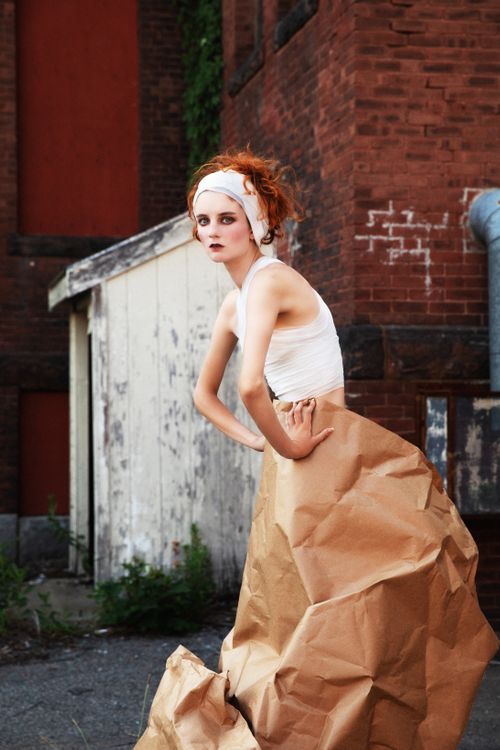